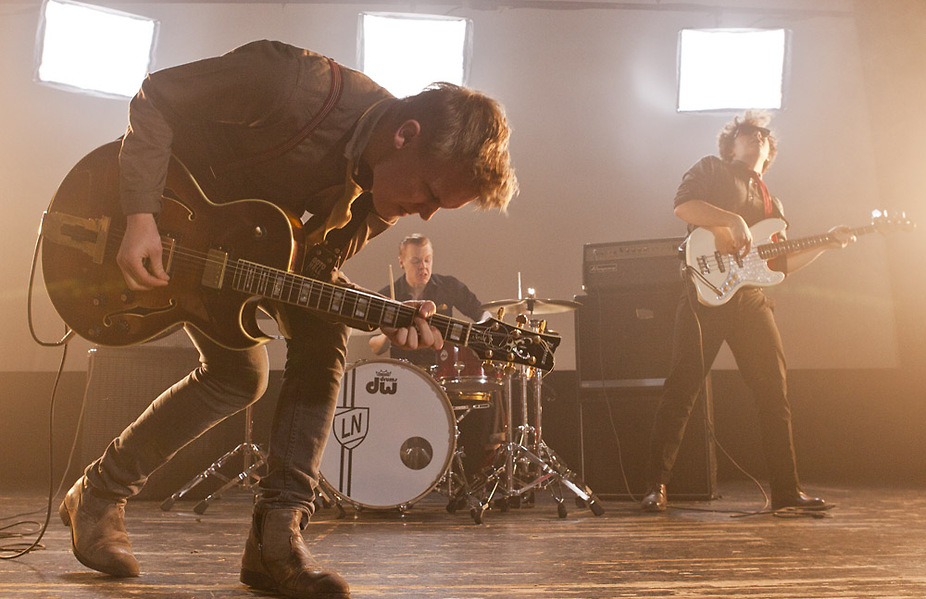 minutenmusik: Hej guys! Hur mår ni? After some well-received pre-release concerts as support of The Temperance Movement in Germany Hard Labor is finally out! How are you feeling now? Do you need to relax a bit for now or are you just getting started?

Factory Brains: Hello there! We’re just swell. Having been on tour with TTM has been a blast and right now we’re just enjoying the release of the new album. A few days after we came back from Germany we went straight back in to the rehearsal space preparing for our upcoming tour with Graveyard and also working on a couple of new songs. So no need or want for rest really…

minutenmusik: Hard Labor is a very interesting album with a broad and wide spectrum of sounds. How did a young swedish trio like you end up composing and playing music that people would definitely associate with rock music bars back in the United States if they didn’t know about the band?

Factory Brains: I guess we’ve just been listening to the right stuff and embraced whatever elements of American music that we’ve been curious about. For a long time we were almost like a small cult worshipping Tom Waits and every piece of music he’d ever written, which of course has made a huge impact on our songwriting and attitude towards rock and roll.

minutenmusik: How and why did you pick “Modern Day” as a single for the album? I personally like the song, though it does not seem to fit to the Americana and Rock’n’Roll influences you have in the other songs on Hard Labor. Maybe another track would have given more insights into the coming album.

Factory Brains: We picked “Modern Day” as a single because the lyrical themes of the song really reflects upon the concept of writing music for a bigger audience and the pressure that comes with it (all the hard labor and so forth). I do agree with you that “Modern Day” doesn’t necessarily represent how the rest of Hard Labor sounds, but it definitely represents Hard Labor in a lyrical thematic sense. Also it’s catchy as hell.

minutenmusik: What are the next steps you have planned? Will you tour Europe? Are there even more tracks to come?

Factory Brains: The next step for us is to go on tour with Graveyard throughout Scandinavia from the beginning of march till the last of April. After that we really hope to come back to Germany again, really fell in love with the venues and the open hearted feel of the people that came to our shows. Regarding if there are more tracks up ahead, I can assure you that we have at least two albums worth of material floating around in the rehearsal space right now. But for the moment we’ll just focus on promoting Hard Labor and playing as many shows as possible.

minutenmusik: You three have been friends since high school. Did the work as Factory Brains put your relationship onto a more professional level? Or do you think your friendship grew even stronger through your own music?

Factory Brains: I can’t think of any stronger way to build an unique friendship than with the help of playing music together. I love the whole concept of being forced to communicate without talking but just playing together instead. It creates a very special bond that makes it so much easier to go ape shit up on the stage without crashing in to one another.

minutenmusik: (Bonus question) Out of my own experience, many Swedish people love fika, coffee and some kind of sweets (kanelbullar rocks!). Are you guys into that? Do you fika on a regular basis?

Factory Brains: We certainly do love to “fika” and preferably four or five times a day (hence the third track on the album). Can’t seem to understand why the rest of the world hasn’t caught up yet on the beautiful concept of fika.

minutenmusik: Thanks for the interview, we’ll see you around!